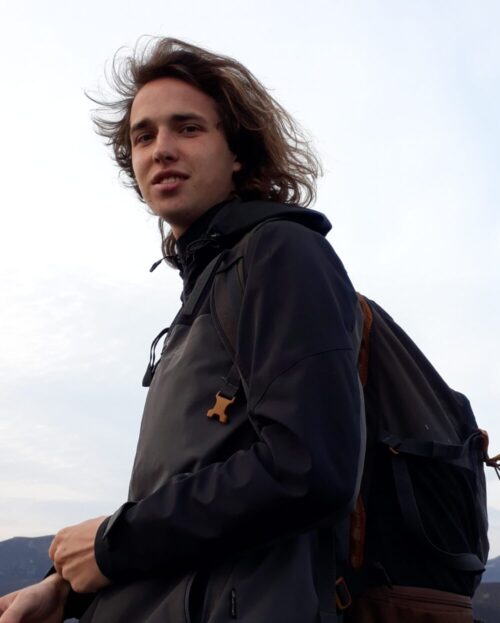 Laury (25.05.99) was born and raised on the Cote D’Armor – the northern coast of Brittany, France – where he lived with his mother, Solen, his father, Jacqui, his sister, Maia, and much later with his half-sister, Poppy. He was very close to his maternal grandparents: David & Kathleen Lees and his paternal grandparents: François & Louise Gratiet.

Growing up by the sea he developed a passion for sailing and for teaching young people to sail – he spent much of his time out on the Atlantic.

Laury travelled around the world with his family – Laury lived at Amanecer in Colombia and loved helping out at the Semillitas day care centre for children when he was meant to be doing his school work (aged 10-11); he volunteered as part of Human Force with Susila Dharma in Kalimantan, Indonesia and Puebla, Mexico; he travelled to Uruguay, Argentina, Brazil, and spent significant time in the UK where he had friends and family, including his godmother, Nina.

All the travelling resulted in him speaking several languages fluently: French, English, Breton and Spanish.

Laury played the accordion and particularly loved Latin American and Breton music and he was passionate about Breton dancing.

Laury had a beautiful smile, an infectious laugh and a warm heart. His mother, Solen, describes him as sensitive, intelligent, stubborn, charming, lovable, passionate, idealistic, infuriating, determined and affectionate!

He cared passionately about people and planet and he was motivated by making the world a better place.

We know that he would want any donations for his legacy to go towards helping others so we have set up this page dedicated to funding youth programmes which have an environmental focus with Susila Dharma.

Instead of flowers, any contributions to this fund would be gratefully received in his honour.

We love you – love is eternal.